All You Need To Know About Downtown Dubai

The residential real estate market in Dubai saw unprecedented growth from 2007 to early 2008 following the establishment of the threshold areas and the subsequent law governing them in 2006. Prices peaked in 2008 following high levels of speculation and then dropped just as drastically in the wake of the global financial crisis. Dubai’s emerging property market has seen relatively short cycles with prices bottoming out in Q1 2011 before seeing growth till Q2 2014. This new market peak was short-lived as prices began to decline in the second half of 2014 and continued to drop into 2020. In the first half of 2021, Dubai’s residential property market posted 24.7K transactions, with ready sale transactions making up 61% of the total. Compared to the same period last year, the value of property transactions has increased by 115% from AED 23.6B to AED 50.7B, proving that Dubai is undergoing a dramatic ‘V’ shaped recovery with the property market back in full swing.

Since the prices have significantly dropped,  we are witnessing a pick-up in demand, which will continue to improve as the economy, business confidence, and income per capita increase due to the government’s economic reforms. A liberal visa/residence policy coupled with the correct prioritization of economic goals will stimulate economic growth and boost real-estate returns.

The Draw of Downtown

Downtown, a flagship Emaar development, could be considered the center of Dubai, characterized by its build-up of luxury skyscrapers around the famous Burj Khalifa, the Dancing Fountains, and of course Dubai Mall, the world’s largest mall. Moreover, its glamorous array of dining and entertainment options, flashy lights, luxurious hotels, and bustling environment make it a draw for tourists from all over the world. Its pedestrian-friendly boulevard and proximity to business hubs like DIFC and Business Bay also offer a complete community living experience making it a popular residential location too.

Downtown has consistently been among the 5 most transacted (sale & purchase deals) areas in the city primarily because of its proximity to significant business and commercial hubs, tourist attractions, and its easy access to major roads and public transportation.

As per Bayut’s 2019 Market Report, Downtown Dubai is among the most popular areas to buy an apartment in Dubai. The community is home to over 12,486 residential units, primarily consisting of high-end apartments equipped with state-of-the-art amenities – so it’s no wonder why this is such a highly transacted and demanded area.

Downtown Dubai Prices peaked in 2014 at AED 2,489 PSF and had increased 64% from the 2010/2011 bottom. The prices over the last 6 years have corrected approximately 30-33%. According to the recent transactional data and independent analysis, it appears the prices have bottomed out and are on the path to recovery.

As new supply has been completed and handed over, the area’s population has increased by 112% from 9,792 in 2015 to 20,795 in 2020 as demonstrated in the chart below. A positive population trend and strong occupancy rates for Downtown demonstrates the drawing power that this area has and is an exciting indicator for Downtown property investors who are looking to gain consistent rental income.

Given the current rental market in the area, where the long-term rents have come down significantly and given the favourable short and long-term tourism trajectories in the UAE, the area lends itself well to the short term holiday let market, with the average rental yield in the area at 3-5%, short term letting can significantly boost rental yields to around 7% depending on the unit, tower, and view.

While the holiday home market has been affected by the Covid-19 pandemic, tourism activity has picked up in the UAE as restrictions have eased, with bookings showing a dramatic increase in recent weeks. Rental income is only one part of the return you should look at when evaluating real estate investment opportunities, always consider capital appreciation.

Whilst much has been said about the overall supply in the city, one should take note of these market commentaries with caution. Much of the upcoming supply caters towards affordable housing, and with a lot of the current market supply being old and outdated, this further pushes towards the draw to already built-up segments of the city.

With Downtown as developed as it is, it can be considered one of the main hubs in the city, reducing any future uncertainty or risks that can be associated with investing in other communities that aren’t as mature and developed.

It can be said that Downtown has and will continue to have limited supply, whilst there are units still in the pipeline to enter the market, one should examine the concentration of what type of units are expected to come in.

Figure 2 shows the majority of the upcoming supply is focused on 2 bedroom apartments and above, with some of the upcoming studios being classified as downtown but in reality being situated towards the business bay. Although studios typically have a higher price PSF compared to other units, studio supply is particularly restricted with little to no expected upcoming supply.

One of the reasons we focus on studio and 1-bedroom apartments is that they typically provide the highest returns and are usually the most liquid when it comes to resale, they are also usually quite difficult to catch deals in the market-unless you have a team of property specialists scouring the market consistently. Downtown Dubai studio prices PSF (exclusive of mortgage transactions) have shown an 18.7% increase when comparing H1 2020 to H1 2021, whilst the number of overall transactions in Downtown has increased 7% in the same period.

Interested in looking at Downtown Dubai investment options that have been carefully selected by our property specialists? Why not take a look at our Downtown studio property that got fully funded in less than an hour from going live on the platform? 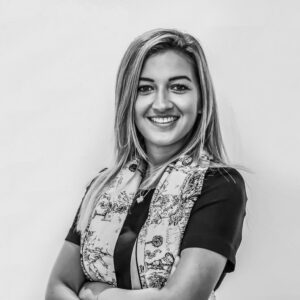 Mona is an impassioned client advocate, that loves helping clients embark on their real estate investments journey. She is one of the first additions to the client relations team.
Linkedin