Real estate is typically a long-term investment in one’s portfolio that provides protection against asymmetric economic shocks, mainly due to its ability to generate regular rental income. The longer you hold it, the more returns you make. For any asset class, it’s difficult to time the market. Let’s be honest, it’s always easier to invest and buy things when prices are going up and very difficult when prices are falling. Humans struggle to think rationally when it comes to investing; FOMO coupled with inability to take risk, often leads to poor decisions. Therefore, it’s important to understand the objective of your investment and understand the time horizon. With real estate, even if you buy at the bottom you could have bought at better prices or in areas/building that had better, long-term returns. The beauty of real estate, especially income generating real estate is that you get paid while you wait out various cycles to look for favorable exit opportunities and to realize attractive total returns.

Let’s look at how Dubai residential real estate has performed over the last two full cycles. Here, we have used year 2010 as a starting point when the market had bottomed and analyzed returns through the last 10 years which included the 2014 peak, and correction since then to present time. 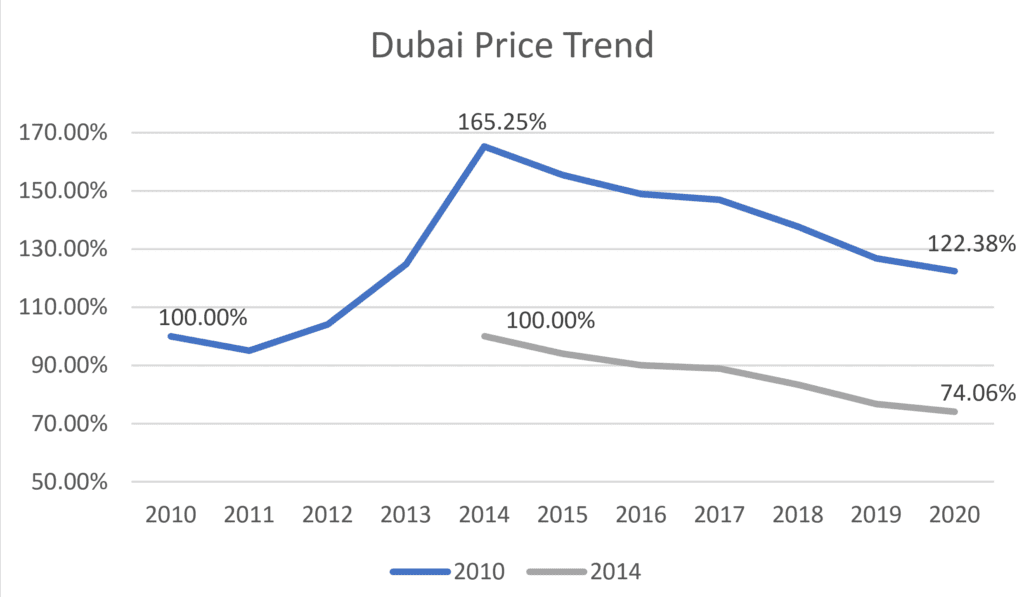 As you can see from the Figure 1, investors enjoyed significant returns buying at the bottom of 2010 and even if they held on to their investment, they would still be up approximately 22.4% – not including any income. However, if you got into the market at the peak of 2014, today you would be down approximately 25.9% – not factoring the income generated from the asset.

Like I mentioned before, the beauty of real estate investing is the steady passive income generated from rental income. If you assume an annual net yield of 5.5% on average from 2010 till end of 2020 one would have earned income return of 78.51% on the invested capital. The other way to look at this is that one would have recovered 78.51% of the purchase price from income alone. And with price appreciation of 22.4%, the total return over the last 10 years would result in approximately 100.90% which represents an annualized return of 7.23%. This simple calculation does not factor in the rental income being reinvested in real estate or other assets. If you factor in re-investment the returns can potentially be much higher or lower if poor investment decision were made.

Investors who had bought in the peak of 2014 have paper loss of approximately 25.9% but would have earned rental income of approximately 33.40% resulting in total return of 7.46% over the last 7 years, representing annualized return 1.03%. It’s not ideal returns due to price depreciation but the loss has been muted from rental income. The longer you hold, the greater the returns due to income being generated. The increased income encourages you to retain the investment and wait for the right time to exit. The capital loss is only realized if one decides to sell in current prices.

Now that you have a view on the total returns on Dubai real estate market from 2010 to present day and 2014 to present day, let’s look at how the returns look for foreign investors. Dubai real estate has long been an investment destination for foreign investors and has attracted billions in foreign direct investment due to its ability to generate good yield, provide political and economic stability in the region and get exposure to USD as AED is pegged to USD. Over the years most foreign investors that have invested in Dubai come from UK/Europe, India, Pakistan and Russia. Recently the Chinese have increased their investments in Dubai as well.

All of these currencies have depreciated significantly against the USD and AED. Meaning they require more of their local currency to buy real estate in Dubai and this one of the reasons we have seen the transaction volume and value, steadily decline over the last few years. However, the ones that had bought, are enjoying higher rental income as AED is currently converting into more of their local currencies. 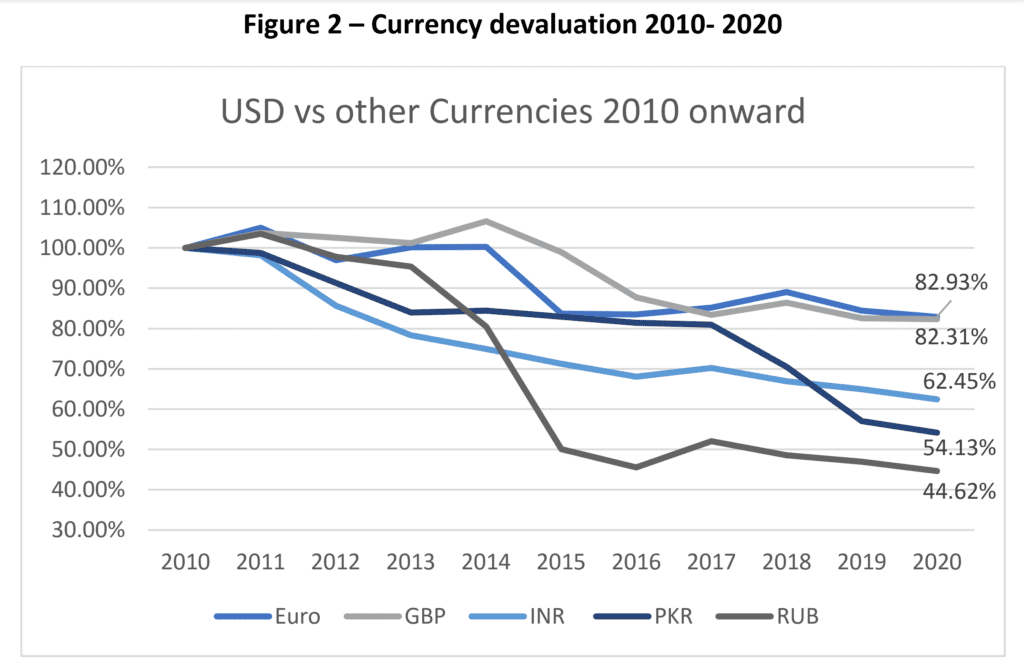 As shown in Figure 2 these 5 major currencies have lost significant value against USD/AED. In the case of GBP it’s approximately 18% and INR it’s a staggering 37.5%. As you can see besides GBP, all currencies had lost value leading up to 2014 peak cycle. The lower local currency didn’t necessarily stop foreign investors from buying into Dubai as they were attracted by the yield that would be generated in USD/AED which will protect their investment. And that is exactly what happened. As you can see in Figure 3, the currency devaluation continued and for some currencies it accelerated in the last 7 years. This currency devaluation ensured that foreign investors made more money on their investment when evaluated from their local currency point of view. For example, let’s assume an Indian investor had bought a property in Dubai in 2010. In AED terms, the value of the property had appreciated by 22.4% as shown in Figure 1. Now because INR lost approximately 37.5% of its value during that time, the same property has appreciated in value to approximately 95.97%: essentially double in value in INR terms. Another way to look at this is to imagine that an Indian investor has used 25 million INR to buy a property in 2010 and at the time that would have converted to approximately AED 2,040,816- enough to purchase a three bedroom apartment.  Today that property is probably worth AED 2,497,959: a gain of 22.4% as per Figure 1. But because the INR has depreciated in value, if that investor were to sell that property today at AED 2,497,959 and convert it to INR, he would walk away with approximately 51,492,053 million INR almost doubling his money in INR terms. I’m sure this investor isn’t too concerned how low the prices have come down from the 2014 peak. We haven’t even factored in the rental income he has earned over the time.

Now let’s assume he had invested INR 25 million in the peak of 2014 and not at the bottom of 2010. In that case, in 2014 his INR 25 million investment would have resulted in AED 1,443,418 investment in a one bedroom. Given the prices have reduced since 2014, that property is probably worth approximately AED 1,069,572. If he were to sell the property and convert it back to INR he would walk away with approximately INR 22 million. A loss of only 11% compared to the total loss in AED of 25.9%. If you factor in the rental income, he actually would have made some money. Keep in mind this loss will only be incurred if he decides to sell. Given that INR has depreciated and despite the rentals have come down he is still making good returns on his capital and those rentals earned in AED are bringing in more INR on an annual basis.  This scenario would be great if that investor is a retiree living in India who had invested here in Dubai. His capital is protected in the form of hard real estate that is paying a good yield despite it being lower than what it was a few years ago, but due to currency devaluation he is probably generating more income.

The table below shows the total return in local currency after factoring in the rental income. As you can see, in AED terms the total return on your investment in 2010 would have resulted in total return of 100% or 7.23% on an annualized basis. This means if you invested 1 million AED in 2010 you have earned an additional 1 million AED over the last 10 years in the form of rental income and capital growth or approximately 72,300 AED on an annual basis. But when you look at investors from different countries who put money into Dubai in 2010, they have enjoyed higher returns as their currency has devalued. Investing in Dubai and getting exposure to USD was a great decision for them.

The above analysis assumes that every year the investors took their income and converted into their local currency. If they had accumulated that income in AED the returns would be even better as shown in Figure 5. As you can see income is a big part of real estate returns. More than half the returns are attributed to income. Income increases your return and protects you through cycles if prices come down.  This is one of the reasons why the wealthy have allocation to direct real estate as it protects their investment portfolio. The consistent income generation allows them to take risks with other investments therefore continuously growing their wealth. This is exactly the ability we want to provide to our users on our platform. Buying off plan doesn’t provide you with such benefits and relies purely on price appreciation. Buying off plan works really well in an environment when prices are rising like the boom from 2005 to 2008 but not in an environment when prices are decreasing.

Now, let’s look at the above return analysis from the 2014 peak. We all know the prices have come down by approximately 26%. But look at the total returns in Figure 6 below. You didn’t make great returns, but you also didn’t lose money, and in most cases, you beat out inflation ensuring your purchasing power was protected. More importantly the income allows you to retain the investment during cycles. Infact, it gives you the ability to take advantage of discounted prices and buy more- either in 2010 or even in 2011, 2012 or while the prices were coming down in 2009.

There are a lot of key takeaways from this analysis. The most important one, is that real estate is a long-term investment and that passive income increases your risk-taking ability and allows you to weather economic shocks, as long as you are not overly leveraged. This also helps us understand the dynamics of the Dubai real estate market which is dominated by foreign investors. As demonstrated, they have not lost a lot of money as the media might make you believe with prices coming down. Infact, their income has slightly increased, even with rent reduction, due to currency devaluation. In the current global climate USD seems to be the safe-haven so many people will be hesitant to sell and reduce the USD exposure. Secondly, tangible assets such as real estate protects them from unforeseen events such as hyperinflation or de-pegging of USD. We have not witnessed any distress sales in the market as most investors are willing and able to wait and see. There will be some deals as some investors might have taken on too much leverage or feel they might have other better opportunities and might be willing to take the hit and sell.

Most of us living here in Dubai, UAE or GCC are expats, and have come here to earn more money to improve our financial wellbeing. Creating a portfolio of assets that provides you with a steady flow of income that can be reinvested while you live and work here, will enable you to reach your financial goal in retirement, where you can choose to go back to your home country and ensure a steady flow of income to subsidize your life style. The sooner you start, the bigger the portfolio becomes, providing you more income in the future.

** Update: Some figures were off due to some miscalculations. We updated the numbers to showcase the correct results.